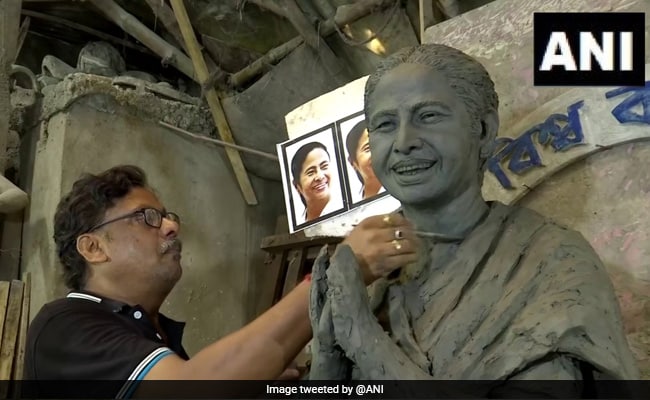 Like Goddess Durga, the Mamata Banerjee idol will have 10 arms, the organisers have said

Bengal Chief Minister Mamata Banerjee is to share the spotlight with Goddess Durga at a Durga Puja pandal – one located near the Kolkata airport – next month. The Chief Minister won’t be there in person but there will be a look-alike, and that look-alike will have 10 arms, like Goddess Durga.

Unlike the Goddess, Ms Banerjee’s hands won’t hold weapons. They will hold symbols of her government’s welfare schemes, including ‘Kanyashree’, ‘Rupasri’ and the latest – ‘Lokkhir Bhandar’.

The Mamata Banerjee sculpture won’t be worshipped. An idol of Goddess Durga will, as is usual.

However, the BJP’s Amit Malviya has condemned what he claimed is the deification, or treatment akin to a god, of the chief minister, and that it is was hurtful to the Hindu sentiment.

“This deification of Mamata Banerjee, who has blood of innocent Bengalis on her hand, following the gruesome post-poll violence in Bengal, is nauseating. This is an insult to Goddess Durga. Mamata Banerjee must stop this. She is hurting the sensibilities of Hindus of Bengal,” he tweeted.

This deification of Mamata Banerjee, who has blood of innocent Bengalis on her hand, following the gruesome post poll violence in Bengal, is nauseating. This is an insult to goddess Durga. Mamata Banerjee must stop this. She is hurting the sensibilities of Hindus of Bengal. https://t.co/1px1OqsFWA

This is not the first time idols of Ms Banerjee have found place in Durga Puja pandals. They have shown up frequently since she became Chief Minister.

This one – a collaboration between three Durga Puja committees – is being made at Kumartuli, Kolkata’s idol-making district, by Mintu Pal, a veteran of the art who says the life-sized idol is being given the finishing touches.

“Every person in Bengal considers her as Goddess Durga. The benefits she provided to people haven’t been seen in the world,” Partha Sarkar, the Vice President of the Nazrul Park Unnayan Samiti, was quoted by ANI.

The idol is made with fiberglass and the Nazrul Patk Unnayan Samiti wants it installed at a prominent place in the city after the festival ends.

With input from ANI