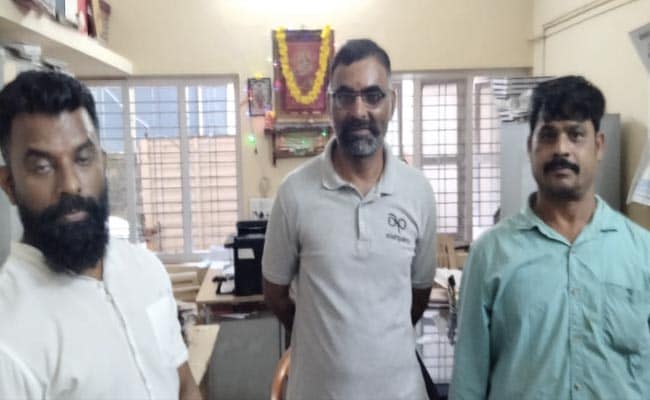 Besides Dharmendra, his associates Rajesh Pavitran and Prem Poolali have been arrested

A leader of Hindu Mahasabha has been arrested in Mangaluru with his two associates, a day after he threatened Karnataka Chief Minister Basavaraj Bommai over the demolition of temple, saying, “We didn’t spare Gandhiji, who are you?”

Dharmendra, state general secretary of the outfit, made the remarks during a press conference on the issue of temple demolition that has put the BJP government in a spot.

The government has come under criticism from several quarters over the demolition of a temple in Nanjangud, Mysuru, following a Supreme Court directive.

Speaking to reporters yesterday, Dharmendra said, “We won’t allow this (temple demolition). We didn’t spare Gandhiji, who are you then? If Gandhiji could be assassinated, do you think we won’t consider the same for you?

“Please remember it will become very difficult for you Basavaraj Bommai, BS Yediyurappa and Shashikala Jolle. You have already stolen eggs and made money out of it. At least spare the temples. We have already gone to court against you over the eggs scandal,” he said, referring to the corruption allegations in distribution of eggs to anganwadi children.

Referring to the court ruling to demolish illegally constructed temples, he said, “The question is whether courts are for people or people are for courts. It is a majoritarian country divided on lines of religion. If it is going to be tough for Hindus then where should we go?”

“Courts should answer. road widening you say but in some places, prayers halls are in the middle of roads. Was there no SC order then? SC has said all wine shops on highways should be closed, but you won’t do that because you get revenue. It is not an SC order but an attempt to appease Muslims and Christians, an attack on Hindus so that minorities are swayed. Hindu Mahasabha condemns it,” Dharmendra said.

He then announced a protest over the issue on Wednesday and said they will hold protests in all districts till the next election. “You are two faced. People should know that,” he said.

Later, while speaking to NDTV, he said that the reference to Mahatma Gandhi’s assassination did not mean that he is threatening the Chief Minister or anyone else. “It was an expression of anger,” he said.

Besides Dharmendra, his associates Rajesh Pavitran and Prem Poolali have been arrested. The case registered against them by Mangalore police has invoked IPC sections 120(B) (criminal conspiracy), 153(A) (promoting enmity between different groups on grounds of religion, race, place of birth, residence, language etc), 505(2) (statements conducing to public mischief) 506 (criminal intimidation), among others.