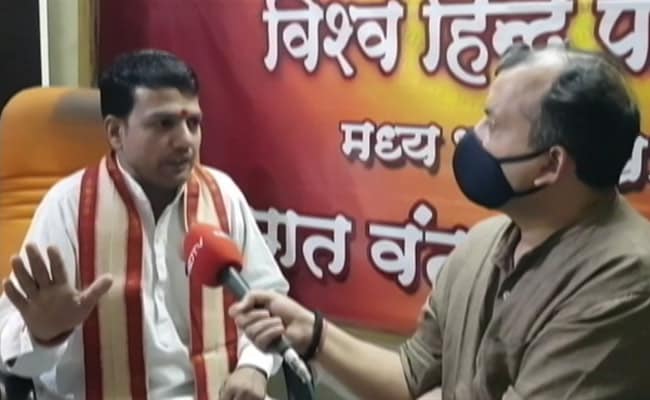 One of the masterminds of the attack on director Prakash Jha and his crew last month on the set of his web series “Ashram” in Bhopal is a Bajrang Dal leader previously convicted of murder, NDTV has found.

Suresh Sudele, the Prant Pramukh (regional head) of the Bhopal Unit of the right-wing outfit was amongst the seven men arrested by the police for the attack on the sets of Ashram. A day later, all seven including Sudele got bail. Police say that they are not to blame since the Ashram team was reportedly not keen to file a complaint. The police booked Mr Sudele and others under a relatively minor section of the law, which meant they were able to get bail immediately.

But Mr Sudele has a violent past that appears to have escaped the police’s attention. In 2011 he was convicted for the murder of Bhagchand, a Bhopal-based businessman, getting bail four years later.

Legal experts suggest the police should have immediately moved the court to get Mr Sudele’s bail on the murder case cancelled after the attack on Prakash Jha. State Home Minister Dr. Narottam Mishra did not respond to a question regarding this.

The Congress has alleged that the ruling BJP is sheltering criminals and Mr Sudele enjoys impunity because of his political connections. The right-wing leader features in many pictures in the company of state Chief Minister Shivraj Singh Chouhan, Home Minister Narottam Mishra, RSS chief Mohan Bhagwat, and other BJP and RSS leaders.

“Suresh Sudele organises the attacks and many including the state Home Minister praise him. He is on bail in a murder case. If the government will shelter such people who have broken laws then how will we build a film city and generate more employment? He should be sent to prison immediately, it’s unfortunate that the state government is sheltering him,” said PC Sharma, former state Law Minister, and Congress leader.

Following the attack, Narottam Mishra had just stopped short of defending the violence by Bajrang Dal men on the sets of the web series. He backed the right-wing group’s demand to change the name of the web series. In a tweet, he said such television content is an “attempt to deliberately target Hinduism”.

“I also support this. Why is the web series named Ashram? They will understand (the consequences) if they name it (web series or stories) after others” (religion)? We consider the ransacking as wrong. Four persons were arrested and further legal steps will be taken. But, Jha saheb (Prakash Jha), think about your mistakes too,” Mr Mishra had said, referring to the web series.

Mr Sudele was evasive when questioned by NDTV about his past and demands for the cancellation of his bail. “We did not threaten Prakash Jha, it was a symbolic protest. Their bouncers from Bhopal attacked us first then this incident happened,” he said. He did not respond to the specific question on his bail.

A group of Bajrang Dal members had gone on a rampage on the set the web series, the police had said. Videos shot by witnesses on mobile phones showed the right-wing outfit’s members chasing down the crew, managing to catch at least one of them and beating him mercilessly with a metal light stand. Prakash Jha was also roughed up and his face was smeared with ink. Mr Sudele bragged about it on camera and said they were looking for actor Bobby Deol, who plays the lead role in the series.