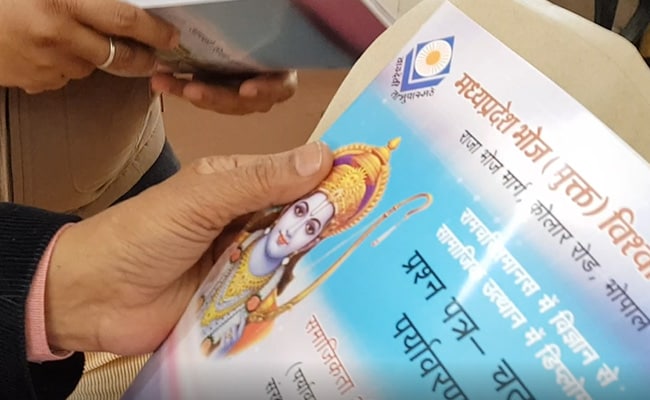 The university has extended the date for enrolment till January 15

The ruling Madhya Pradesh BJP, which champions Hindutva, and the opposition Congress, which has been treading the soft Hindutva line since 2018 in the state, have not shown any interest in the one-year long diploma course in Ramcharitmanas Se Samajik Vikas.

The course in being championed by the assembly Speaker Girish Gautam, who says he will continue to urge members to take it up.

“I’ve urged the MLAs at least twice to take advantage of the courses being offered by the Open University, but none of them seem to be interested. I can only appeal to them, as they are not Class I students, who can be forced by parents to go to school or attend classes, they are grown up and wise people, I can only urge them, which I’ll continue doing,” Girish Gautam, state assembly speaker, told NDTV.

“This course contains well researched course material developed in association with the Ayodhya Shodh Sansthan (UP), dealing with treasures of Physics, Chemistry, Biology and Environmental Science which are hidden in the chaupais (couplets) of the religious scripture, but as far as I know no MLA has joined the course,” said Dr Jayant Sonwalkar Vice-chancellor of Bhoj University.

Ruling BJP MLA Harishankar Khatik confirmed that the Assembly Speaker had appealed to all MLAs to profit by joining the Open University courses, but couldn’t explain why he and other MLAs did not show any interest in acting on the Speaker’s appeal.

“The Honorable Speaker had given a call that the MLAs should be educated. In the coming times, I think they will enrol themselves,” said Mr Khatik.

Former Congress minister and MLA PC Sharma said, “During the Covid pandemic, people were already reading Ramcharitmanas indoors. Even I read Hanuman Chalisa from hospital. If the Vidhan Sabha Speaker has appealed to the MLAs to benefit from the Open University’s courses, then MLAs will definitely enrol in the courses in future.”

The university has extended the date for enrolment if the MLAs wish – they can enlist themselves for the course till January 15. The duration of the course is one year and the course fee is Rs 3,000.