The Delhi High Court on Wednesday reprimanded the Enforcement Directorate for insisting that a top Amazon executive – a resident of Mumbai and the mother of a two-year-old child – be physically present to answer a summons issued as part of its probe into the Amazon-Future Group deal.

The court told the agency it could not demand Hina Doon travel to Delhi, despite being unable to arrange a temporary guardian, and potentially risk herself and the child being infected with Covid.

“It is not in good taste. This is not the manner in which an officer should respond…” the High Court told the agency after Amazon’s counsel brought the letter to the court’s notice.

“We are not defending it. We too share (the court’s) concern, and we will convey it to the officers…” Solicitor-General Tushar Mehta, appearing for the central government, told the court.

The court then adjourned the hearing – on Amazon’s plea against summons to its top executives – to next week.

Ms Doon on December 8 had written to the Enforcement Directorate in response to summons saying it was difficult for her to travel to Delhi – particularly in light of the growing number of Covid cases in the two cities (Delhi and Mumbai) and the rapid spread of the Omicron variant – as she was the parent of an unvaccinated young child.

Only children between the ages of 15 and 18 have been cleared for vaccination at this time.

“It is especially difficult for me to travel at present as I am a young mother, with a child who is two years old and who is not vaccinated. I do not have any extended family in Mumbai who can take care of my daughter in my absence,” Ms Doon wrote.

“My husband is working from office and given the nature of his job, it is not possible for him to take temporary leave at such short notice,” she said. 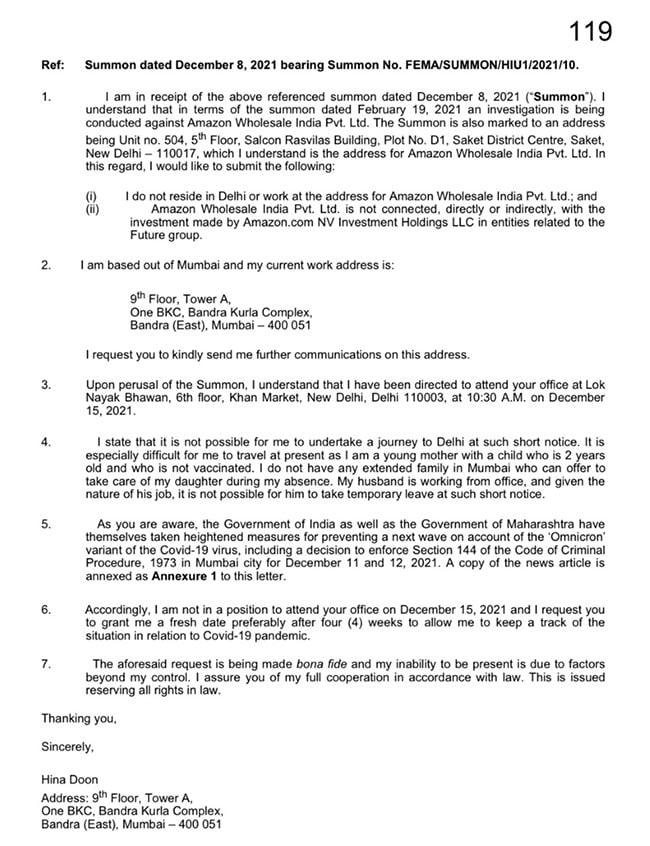 Ms Doon had been summoned on December 8 and been given a week to appear.

She then asked for a fresh date “preferably after four weeks…”

The Enforcement Directorate’s response to this request was rather brusque.
“… none of the grounds stated by you justify your non-appearance,” Rajendra Singh, an Assistant Director at the agency’s Delhi office, said in an e-mail to Ms Doon.

“… there is no requirement of vaccination of children for travel as far as I know…” Mr Singh wrote, adding, “… the grounds stated by you for non-appearance are superficial.” 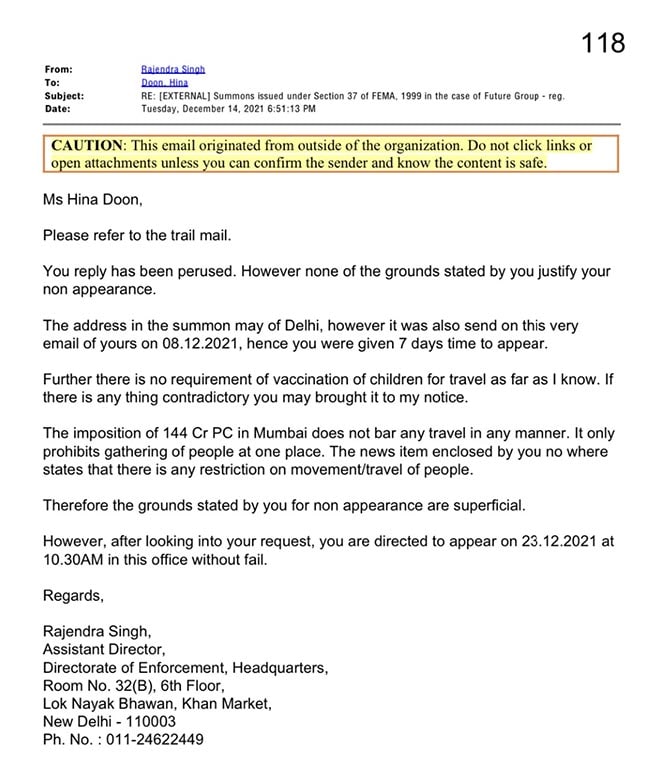 Amazon has moved the Delhi High Court challenging summons to eight of its top executives by the agency as part of its probe into the alleged foreign exchange violation by the multinational company.

Amazon through its counsel submitted in the court that the agency through summons “have sought details about internal documents, legal opinions sought by us”.

While the Delhi High Court has not stayed the Enforcement Directorate probe but has asked the central agency not to insist on physical appearance of Amazon executives in Delhi and has posted the matter for next week.

Will “Reach Out” To Government: Oxfam On Foreign Funding Licence Renewal – dot newz